“Show the love” for our common home this February

Previous Next
“Show the love” for our common home this February 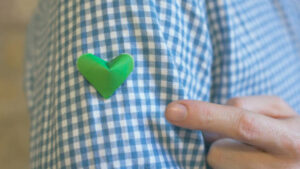 Displaying green hearts alongside allies from organisations across the climate movement is a way for Catholics to echo both the cry of the earth and the cry of the poor.

Last year, CAFOD supporters mobilised in huge numbers to bring this message to our government and world leaders ahead of COP26. More than one hundred MPs were met by parish groups, thousands signed our petition to the Prime Minister, and we joined demonstrations during COP in London and Glasgow to send a clear message to world leaders that we demand they protect our common home.

CAFOD supporters, alongside countless others around the world, did make a difference. They helped persuade governments to take greater action, even if world leaders still don’t recognise the urgency required.

Whilst collective action to limit global warming to 1.5 still falls short, some governments came up with new commitments for emissions reductions. Governments have committed to ending overseas investment in fossil fuels, but we still don’t have that same commitment at home. Climate finance pledges are greater, however, the $100 billion targets agreed at the COP in Copenhagen still hasn’t been met, much to our disappointment.

This is why CAFOD joined Oxfam and Christian Aid to organise a post-COP briefing in parliament; giving MPs and Peers an opportunity to hear our partners’ reaction to the COP outcomes. We will soon begin the season of Lent, and CAFOD will host a reflection so MPs can contemplate how they ought to respond to the call to care for creation. In March, following the thousands of letters sent to MPs by CAFOD supporters, we will invite Human Rights and Environmental Defenders from Colombia to speak to MPs about a new Business, Human Rights, and the Environment Act.

CAFOD knows that climate justice cannot be achieved alone, but by working together with allies in this country and around the world. That’s why we are a proud member of The Climate Coalition, we showed our green hearts in Glasgow, and we are showing them again once more.