10,000 Welsh voices call for Climate Action at the Senedd!

Previous Next
10,000 Welsh voices call for Climate Action at the Senedd!

Climate Cymru is gathering voices from all over Wales and making sure they are heard by the people in power. It is the leading Wales-based campaign focused on COP26, with 230 partner organisations, and growing, from all sectors of society.

It’s an important and worthwhile campaign to represent voices from Wales at COP26 this November in Glasgow, and keep the focus on the call for climate action by governments at all levels beyond the climate talks.

Ahead of the UK hosting the UN Climate Summit in November (COP26) we will show decision makers that people from Wales want action on climate change, presenting the collective voice of Wales to the Welsh Government at the Senedd on 19th October in front of a giant Ice Heart. There are over 10,000 voices collected so far.

The public are welcome to come down to the Senedd on Tuesday 19th October to see the Ice Heart, which will be lit up with projected voices following the event, between 12pm-8pm.

We’re encouraging people of all ages and all backgrounds from Wales to add their voice and what they want to see politicians doing here. (climate.cymru/add-your-voice). Together we can amplify our voices and be a strong Welsh influence on decision makers in Wales and globally at COP26.

“The ice heart sculpture at the upcoming event is beautiful, and temporary. It will soon melt away. Our window of opportunity for action to protect the things we love is also fleeting and impermanent.

In a few weeks time world leaders will descend on Glasgow for the UN Climate Talks. Our message to Welsh and UK Government ministers attending COP 26 is this: be bold, show leadership, push for concrete, timely action, inspire, and galvanise others on the world stage. There is a groundswell of public opinion behind you, who want real change.

“From every corner of Wales, and from every walk of life, thousands of people and hundreds of organisations have spoken. They all want the same thing. They want action from our leaders to protect what they love and make a better future for us all.”

“The voices collected by Climate Cymru demonstrate there is real public support for bold climate action here in Wales. We urge the Welsh Government to pick up the gauntlet and publish an ambitious Net Zero plan that is in line with climate science and the principles of justice and responsibility.

“Let’s not waste this crucial opportunity to take action and protect what we love. There are so many things at stake – our lives and livelihoods here in Wales, the future of the rich biodiversity of this fragile planet and the future of those most affected by the climate emergency in the world’s poorest countries who are doing least to cause it.

“We can’t solve the problem when we scratch at the surface. Our emissions targets, for example, are still out of kilter with climate science. We need to urgently up the pace, and move swiftly and deeply, towards the goal of net zero emissions to save lives, livelihoods and our fragile ecosystem.”

As hosts of COP26, it is especially important for the UK Government to show leadership in combating climate change. Wales has an important part to play, and the campaign aims to make sure the Welsh and UK government are showing leadership with meaningful, evidence-based and just commitments at COP26. A key focus is to ensure that the often under-represented areas and demographics of Wales have a meaningful opportunity to contribute and are considered as we make the changes to our society that we need to. 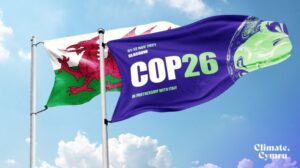 The Climate Cymru campaign has been centred around meaningful and fair action to address the climate emergency, gathering voices from all areas and demographics of Welsh society. As partners or people signed up, they told Climate Cymru what is important to them and the responses received will shape the campaign’s communication and advocacy at COP26 and to county councils, Welsh and UK governments. Ultimately, the people of Wales own the message.

Event Details: The event will be a gathering of key Climate Cymru ambassadors and partners, representing the voices of thousands of people from all over Wales calling for climate action by leaders as we approach COP26. The messages will be received by Deputy Minister for Climate Change, Lee Waters MS.

It’s easy to add your voice as an individual here climate.cymru/add-your-voice, and the campaign also has options for businesses, non profit organisations or ambassadors to support the campaign. Our network of over 200 climate-conscious organisations from all sectors and areas around Wales is increasing, and presents an opportunity to connect to other organisations and drive climate agenda in the future too.

Watch this clip from ITV news on the day.