How my faith inspires me to campaign for climate action

Anna Fraine, a CAFOD Campaigners Officer and Trustee for Million Minutes, explains how her faith motivates her climate campaigning:

This Lent, I am challenging myself to be silent as a faithful act of campaigning.

My time staying silent – with hundreds of others – hopes to create a deafening ‘noise’ as an act of solidarity with young people around the world, who have been disproportionately affected by the pandemic and will largely carry the burden of climate catastrophe.

For me, this challenge is my way of showing other young people that they can be the change they want to see in our world, drive climate action, and is a reflection of Pope Francis’ recent Lent message to bring back hope in uncertain times.

For many young people of faith, the climate crisis has become intertwined with our spirituality. Beyond the headlines of a looming disaster, it has become a matter of justice and solidarity with global communities who are paying the price for a crisis they have done least to cause.

From my experience, this heightened concern is borne from the Church’s teachings on the subject.

Every piece of advice is clear: it is all our responsibilities to act. And, by seeing the effects of the climate crisis in our global congregations, this sometimes-abstract threat of a climate emergency becomes all too real. 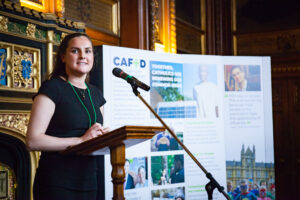 Growing up, the climate crisis felt a million miles away from my daily struggles. Yet, through the Church, I was able to link up with communities around the world.

During a year out, I volunteered in eSwatini – the country formerly known as Swaziland. There I witnessed people whose lives were already being devastated by the ‘future problem’ of the changing climate.

Although seeing the impacts of the climate emergency first-hand filled me with dread and uncertainty, I discovered a roadmap for positive change, Pope Francis’ environmental letter Laudato Si’.

Published in 2015, he calls on everyone to reconsider their relationship to the planet and with each other. The message to “look for solutions not only in technology but in a change of humanity” reignited my motivation to act.

Taking these lessons from the Church, I became a climate campaigner, raising awareness within my local area and constituency. Championing ways to positively improve my community, while enacting climate action to bring about small but meaningful change. 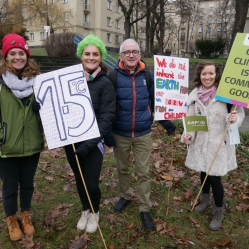 Speaking out gave me confidence, and soon, I joined a passionate group of young Catholic volunteers who were actively campaigning about the climate. Together, we travelled 24-hours by coach to Poland for the UN annual climate conference COP24. Joined by thousands of other campaigners from around the world, we lobbied leaders to act.

In June 2019, I travelled down to London for the biggest climate lobby in history ‘The Time is Now’ and I was privileged enough to be asked to speak to MPs at parliament. There, I shared my experiences and called on decision-makers to ensure Britain no longer contributes to the climate emergency.

This year, I plan to travel (Covid-permitting) to Cornwall for the G7 meeting, where world leaders will discuss climate action. In November, I hope to march in Glasgow with thousands of others at COP26. Together, we will hold leaders to account for the commitments they made in the Paris agreement, in ​2015.

Through faith, I found my voice to 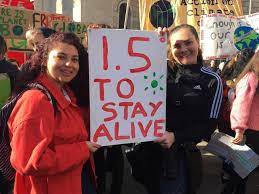 speak up for change and it is clear the church has a crucial role to play in supporting young people: acting as a beacon of hope, calling for change, and applying it in congregations.

If there is one lesson I’ve learned from my faith community, it’s that everyone has a role to play. We each have the power to drive real change and there is no time to delay.